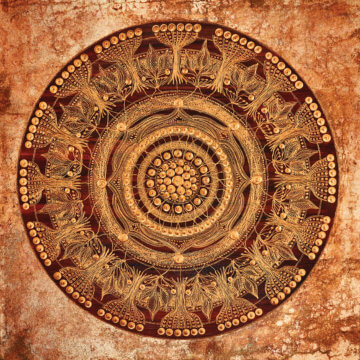 Despite its clear dramaturgy, 'GAIA' isn’t just a soundtrack to a story. The actual creation and evolution of the album - its recording process and all the collaborations therein involved – embodies the themes of transformation, diversity and cooperation necessary and present in earth’s own evolution. 'At the start, I had a clear concept in mind, but it changed, like earth itself. It collapsed and something new came from it. It's always evolving,' says Henning Fuchs.

Allowing the musicians space and freedom to properly contribute in the music also meant tracks grew and developed by their own logic and organically, 'The choice of musicians was really very important, and it was important that they felt happy with what they were doing rather than just playing what I had written.' says Henning, who assembled a series of notable musicians and an impressive array of world instruments for the project. Amongst others, GAIA counts with the participation of Chinese musician Guo Gan playing the erhu and zhonghu, the Spaniard Julián Olivares on the flamenco guitar and charango, the German David Kuckhermann on handpans, udu and other percussions, the Icelandic violin player Elfa Run Kristinsdottir, as well as the choir, Bulgarian Voices Berlin. 'I wanted to bring together cultural elements from all over the world together by using 'down to earth' elements and sounds.'

The album 'GAIA' by Henning Fuchs will be released on November 13, 2020 at Neue Meister as vinyl, on CD and digitally on all streaming and download platforms.