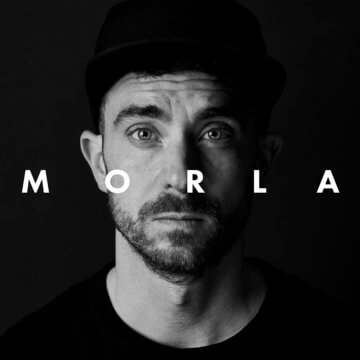 With his eighth album, MORLA, ECHO prize winner Tim Allhoff shows curiosity, self-confidence, and stylistic diversity, reflecting his various musical influences. He has been one of the essential pianists on the German scene for many years. The magazine JAZZTHING calls him the "Piano Shooting Star of the Republic", and the SÜDDEUTSCHE congratulates him, at the latest with this release, on rising to the top class of solo pianists.

MORLA is the wise, gigantic turtle from the children's book "The Neverending Story" by Michael Ende. She lives lonely in the swamps of sadness and knows millennia-old stories from all over the world. To get the wisest of advice from her, you have to expose yourself to the danger of the swamps; otherwise, you won't reach her. She is a little strange, speaking of herself in the plural; she is a thinker who lets her thoughts mature over many years and yet never moves from the spot. She is a mountain and prophet in one being. She is eternity and origin. And originality is what Tim Allhoff's new album MORLA is all about.

MORLA is the eighth album by the pianist and composer Tim Allhoff, honoured with various musician and composer awards throughout his career. His earlier albums are heavily influenced by jazz and have received several awards. But Tim Allhoff is also at home in classical music, which has accompanied him since childhood. He recently arranged parts of the debut album of shooting star soprano Fatma Said, at whose side he can be heard both on the album and on stage.

Now, Allhoff takes the opportunity to reflect on the origins and course of his artistic work as a pianist and composer. The resulting compositions evoke a variety of contrasting moods, like browsing through a photo album. "I grew up listening to a lot of classical music and later graduated from the conservatory in Munich as a jazz pianist. But I've always been interested in very different styles of music - my playlist could feature Bach's English Suites, followed by Radiohead, the Beatles and Miles Davis", explains Tim Allhoff with a smile.

Consequently, besides original compositions, the album also features works by other composers. Even the album opener, "Death with Dignity", is a song by Sufjan Stevens, a US songwriter whom Tim Allhoff holds in high esteem. He arranged the piece for the Berlin Leonkoro Quartet. The multi-award-winning string quartet also plays an essential role in two other compositions: "Day of Leaving" and "Lea's Song". In his piece "For Iori", on the other hand, a longing violin is suddenly heard, played by Niklas Liepe on his Guarneri. Tim Allhoff is very happy about the participation of these long-time friends: "I have known Niklas for quite a while and love his sound. It was great that he could be a guest. The same goes for the Leonkoro Quartet, whose sound thrilled me from the very first moment".

In "Schumann Exploration", Tim uses a movement from the "Album für die Jugend" as a starting point for improvisations. These spontaneously created melodies blend smoothly with those Robert Schumann wrote down more than 100 years ago. For Tim Allhoff, this is a testimony to the timelessness of this music. Felix Mendelssohn-Bartholdy's "Schäfers Klagelied" (op.67/5), Johann Sebastian Bach's Organ Sonata IV and the jazz ballad "In the wee small hours of the morning", made famous above all by Frank Sinatra, are further works that have influenced Tim Allhoff's work and are now united on MORLA.

And of course, the title piece itself is also on the album, dedicated to someone very close to the pianist. When asked in which musical genre Allhoff himself sees his new work, the pianist does not know a clear answer. "I hope that my music touches and awakens emotions. Because that's what music is all about," he adds.

The new album 'Morla' is available on all music platforms.