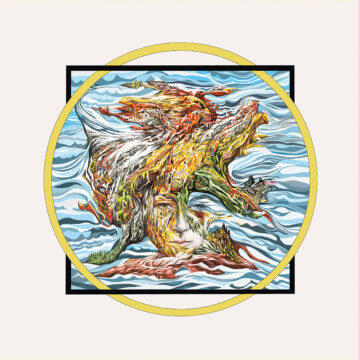 Marina Baranova knows a thing or two about conjuring fantastical worlds. Since her childhood when she’d sit with her fairy tale books open in front of the piano translating the pictures she saw into sound worlds up to her last album, where she envisioned a darker side to Debussy, the Ukrainian composer and pianist’s imagination has always played an active role in the music she plays. For her latest release, 'Atlas of Imaginary Places', she lets it run the show. For it, Baranova worked with the Danish visual artist Christian Gundtoft and Ukrainian writer Volodymyr Kompaniets to conceive more than just an album. “I wanted to create this alternative listening experience,” she explains, “Don’t underestimate the power of imagination, now more than ever, it’s important to remember we have this treasure within us.”

Different from the concert experience where the connection between artist and audience ends with the music’s final note, 'Atlas of Imaginary Places' allows conversations to carry on. Through a specially-designed website, the three artists mapped out a whole new world that can be explored through visitor’s every sense; visuals, story-telling and sound. “Of course, the music will be on the streaming platforms too, but it’s primarily a platform where you can go deeper into this world we’ve created. You can zoom in and out of this map, listen and read and slowly explore this fantastical place,” explains Baranova, “I want people to unfold this whole universe for themselves.”

For the project, Christian Gundtoft and Volodymyr Kompaniets worked independently from each other, only having Baranova’s untitled music as the starting point for their own creations. “I didn’t want anything to influence their own imagination and conception,” explains the pianist. The 17 tracks on the album, however, contained enough material for the artists to delve into, Baranova’s music is after all known for its vivid imagery that immediately conveys intense pictures, emotions and story-lines, and the pianist has said in the past she “sees” sounds as colours. “Opal domes burning bright in the rays of the evening sun”, “green sea stretching out horizon-to-horizon”, and “cane leaves, sharp like centaurs’ arrows” are just some of the rich visual descriptions strung together by Volodymyr Kompaniets inspired by Baronova’s music.

Like glimpses of an unknown archipelago seen through layers of mist, Baranova’s sound world is a spectacular setting that reveals itself slowly to listeners. The album’s opening track, 'Leviathan Town', expresses the trepidation one might feel in entering these uncharted waters, “I composed this piece during the first lockdown, at that time no one, myself included, knew what was happening. I tried to express this strange and confusing feeling in the piece,” says Baranova. It’s an enigmatic journey that cycles through moments of light and warmth, before being shadowed by mystery again. The juxtaposition between lightness and darkness, gentle melodies and somber tones is something Baranova plays with in the entire album, making the music unpredictable from start to finish. To add to the fickle feeling, she also changes from a structured classical playing style to free-flowing jazz frequently, “Both my parents are musicians, my mom is a classical musician and my father a jazz pianist, so I always had everything under the same roof,” explains Baranova.

'Canopy of Heaven' exemplifies just how comfortable Baranova feels in oscillating between the two genres; over a romantic bed of chords and arrangements inspired by Mendelssohn’s Songs Without Words, the melody – borrowed from the 20th-century jazz standard, The Masquerade - flutters freely, “These two pieces seemed to belong together, both fit in the world of Venetian gondolas and masquerade balls,” says Baranova. With influences that span two hundred centuries, Baranova manages to create an impressive piece that feels like a meditation on familiarity and strangeness.

'Atlas of Imaginary Places' is proof that our imagination is in fact a portal, and beyond it exist places that can be accessed and shared by all. The intimacy and synchronicity between the artists in creating 'Atlas of Imaginary Places' made it seem like they “shared an island”, a magical space Baranova is now inviting others to explore too. It isn’t a linear journey, rather it delineates a space outside time that can be explored in an infinite number of ways. On a first listen, one might appreciate the vastness of the landscapes painted, and on another, ponder the depth of its minute details. The music is both ample and deep, and in delving into any given track, any given island, listeners are left with a feeling that there’s always more to look out for, making their own exploration an active part of the listening experience. In the album’s focus piece, 'Constellation Machine' the music seems to directly inquire at the listener. With its languid melodic looping and halting the music poses the question “where to from here?”. For Baranova, something’s definitely changed going forward, “For me, this is the moment of transformation. Those transformations are not so easy for us, but they are very important”.

'Atlas of Imaginary Places' is now available on all music platforms.