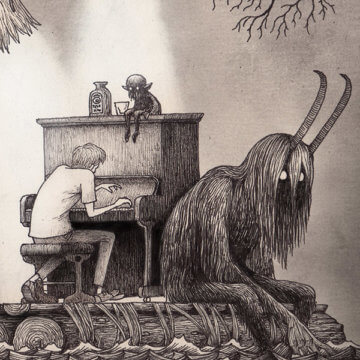 The new album “If the music stops, they’ll eat him up” by Asger Baden is out

Danish composer, pianist and producer Asger Baden has made a name for himself as a film and TV-series composer with his atmospheric music featured in world-acclaimed productions such as “Breaking Bad” and “The Wolfpack”. After having worked on several collaborative projects and composing with his bands “The Crooked Spoke” and “Cours Lapin”, Baden now releases his album of solo material, “If the music stops, they’ll eat him up” via Berlin-based label Neue Meister.

“If the music stops, they’ll eat him up” invokes through its nine tracks a sense of mysterious and highly visual storytelling. As is expected of a composer who has worked with cinema extensively, the music unfolds much like a motion picture, conjuring images that are rich and textured. It’s as if Baden was painting a wide and vast musical room where the listener is invited to explore its every nook and cranny, from soft percussive footsteps in the background, to the whispering rumbles of synthesizers just in front or the frail conversation of strings happening to the side. There’s an overwhelming sense of openness and atmosphere to every sound, with a churchy echo delineating the space that surrounds them. “I want to put myself in a position where my ‘ears are wide open’ to the quirks, random incidents and happy accidents rather than being totally focused on the composition in a conventional sense,” says Baden, “to me, this opens a door to a much larger canvas, so to speak.

There’s an intentional vagueness to Baden’s compositions that resembles films with open-ends. ‘Crooked Spoke’, a journey which unfolds nonlinearly through the clarinet, piano and strings captures this enigmatic feeling, each instrument tells a part of the same story, slightly borrowing from jazz the idea of an ongoing yet inconclusive dialogue. “I record hours upon hours of improvised material with myself and other musicians, to then harvest bits and pieces from these vast fields of sound,” explains Baden of his creative process which relies on meticulous post-production. Despite the undeniable attention to detail in the piece – the distinct reverberation of every note and the palpable crackle of the clarinet – the music’s full picture is never truly revealed, its overall intent remains shrouded in mystery and allure.

The fact that bold experimentations and simple motifs both have a complementary role on this album is testament to Baden’s familiarity with sound and to his willingness to open and stretch it as far as possible. Having studied piano and keyboards in Copenhagen’s Rhythmic Conservatory, his compositions have always embraced the natural qualities of traditional instruments as well as pushing at their physical boundaries.

“By hammering the piano string your ear can to a certain degree decipher the fact that it’s a piano, but it has the mood of a dulcimer or an old clock. By bowing the piano strings with fishing wire you get a really ominous sound. The pitched down clarinet sounds more like a ghost playing the saxophone in a black and white movie,” explains the composer, “I find it really inspiring when music is not too easy to define or pin down. It keeps me, and hopefully the listener, curious.”

The track, “Nobrac Naked” captures the conundrum of the listening experience. While the first part of the piece – featuring exclusively string orchestra and clarinet and recorded in the majestic concert hall Rudolfinum in Prague – channels the world of classical ballets and operas, the purity of the sound subtly gives way to a surreal sampled atmosphere. Much in the same way ballet or theatre can employ rigorous techniques to open up fantastical fantasy worlds, the track softly teases the fine line between traditional and avant-garde approaches to music-making.

There’s definitely a lot of space for fantasy within “If the music stops, they’ll eat him up”, and much is left to the imagination of the listener. The album’s title in itself begs a frightening question – “who’ll eat who up?”. The accompanying cover art imagery, by Danish illustrator John Kenn Mortensen, with depictions of creatures that – depending on the beholder – might be viewed as friendly or menacing, only amplifies the sense of reverie. These are exactly the kind of ambiguous pictures that Baden himself paints with the music; grand opulent salons with eerie and dark corners; calm, temperate spring days with the ever-lurking threat of thunder. The album’s title track juxtaposes looping picked piano strings with the longing sound of the symphony orchestra to create a tempo that’s fast-paced and yet also languid, and a mood that’s both sombre and hopeful. Of the track, Baden says that “the contrast suggests there might be more to the story”. Indeed, the track – and entire album – calls for the active participation of the listener in filling in the blanks. Like all good pieces of art, it incites more questions than it formulates answers.

The new album "If the music stops, they'll eat him up" by Asger Baden is available physically and digitally everywhere.

Asger Baden If the music stops, they’ll eat him up
News