Composer and conductor Christian Jost has done much to shape the contemporary music of the past 15 years. His 8 full-length operas to date and a wealth of major symphonic works have been premiered by such leading opera houses and orchestras as the Komische Oper Berlin, the Berlin Philharmonic, Zurich Opera, the Taiwan Philharmonic Orchestra and Vlaamse Opera Antwerp/Ghent and are now established in the European operatic and orchestral repertoire and played worldwide.


Always in search of exciting modern narrative forms, he has created innovative new works of music drama and set them on a plane that magically dissolves space and time and has women at its centre. One of those works was the magic-realist opera RUMOR, which Jost developed together with the Mexican screenplay writer and director Guillermo Arriaga (Babel, 21 Grams, Amores Perros and Burning Plain), another was his totally new conception of Shakespeare’s HAMLET in which Jost for the first time in the history of opera has Hamlet sung by a woman, then there was the nightmarishly surreal opera ROTE LATERNE, which Jost planned as a time-and-space-annihilating adaption of Chinese cult filmmaker Zhang Yimou’s Raise the Red Lantern. For the Radio Choir of Berlin, Christian Jost evolved the completely new genre of choral opera, which emulates Greek tragedy by casting the choir as a leading actor and determining force. The two works he has written to date are ANGST, based on the real-life experience of two mountaineers in the Andes and set as a polyphonic journey into the heart of fear, and LOVER, a large-scale Zen-inspired meditation composed of chant, percussion and martial arts charting a path into the heart of love. The symphonic genre is another field in which Jost explores the “condition humaine”. This is well illustrated by the CocoonSymphony, composed in 2003 as a sonic odyssey into one’s own personality, and the BerlinSymphony of 2015 as a pulsing loneliness in an urban soundscape. The mezzo-soprano Stella Doufexis, who died far too young in 2015, was the wife of Christian Jost. She was the source and the beating heart of all his works and of his artistic achievement. 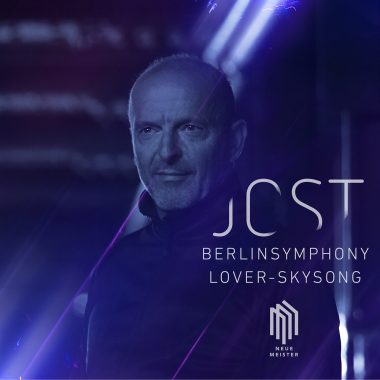